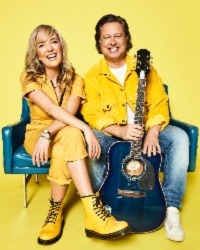 Just off the heels of their second JUNO Award for “Heart Parade”, as well as a 2022 Canadian Folk Music Award, Splash’N Boots are bringing their nearly 20-year legacy in the children’s music lands to new generations with a family show filled with connection, music and heart. On television, they appear daily in over 8.5 million homes across Canada with their number one TV show, which is broadcast daily on Canada’s top children’s television networks, Treehouse TV and Disney Jr. Canada. Splash’N Boots recently wrote and produced an episode for SesameS treet and their original music videos are featured on US TV network Universal Kids’ preschool music show, “Get Up and Move”. Splash’N Boots believe in a world where music can be enjoyed across all generations and have recently collaborated with Alice Cooper, Brett Kissel, Johnny Reid, Alan Doyle, Simon Ward of The Strumbellas and The Wiggles, and Sharon and Bram.