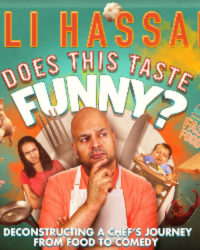 Ali Hassan is a Stand-Up Comic, Actor and Chef who has performed on stages across Canada, in the U.S. and twice in the Middle East at the Amman Stand-Up Comedy Festival. He has been invited twice to perform at the Just For Laughs Festival in Montreal and Toronto's JFL42. Ali has also performed as part of the Winnipeg Comedy Festival - a set that aired on CBC Television. Ali is also a Canadian Comedy Award nominee who has taken his solo show Muslim, Interrupted to Scotland to perform at the world's largest comedy festival, the Edinburgh Fringe Festival. Ali is also the host of Laugh Out Loud on CBC Radio and SiriusXM, on which he wrangles top Canadian comedians for a listenership of over 1 million people. He is also the frequent guest-host of q - the premiere national arts & entertainment show that airs on CBC Radio One, NPR and PRI. He was also the Lead Comedy Panelist on CBC Television's George Stroumboulopoulos Tonight, recording over 160 episodes with the show.

This is a general admission performance - the seats are on a first come, first serve basis when you arrive at the venue.

Doors open 1/2 hour prior to start of performance.